Emotion's Double-Edged Sword: When We Remember the Forest for the Trees or Not 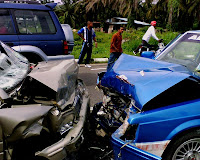 You are driving to work when a car suddenly crosses into your lane, careens toward your car, and narrowly misses you, slamming into a wall instead. Your heart is racing, and you will surely remember this incident for a while, but will you remember anything else happening at the time? Will you remember the song playing on the radio or other cars that were nearby? Talks today at the CNS meeting in Chicago explored some of the latest research seeking to understand how such emotional events affect our memory.

In the “arousal-based competition” model, when multiple stimuli are present, they compete for neural representation, Mather explained. Changing how we are introduced to the neutral items or how we perceive their importance will determine how well we remember them.

For example, in one study, Mather's team showed people an image with several letters of the alphabet, a few of which were high contrast against the background while the rest had less contrast – to give greater salience to the high-contrast letters. They then blasted people with either a negative stimuli – the sound of bees buzzing – or a neutral one – cows mooing, to see which letters people would recall best. The negative sound enhanced short-term recall of the high contrast letters and impaired contrast for the low-contrast letters, relative to the neutral sound.

This is one example, Mather said, of how the arousal-based competition method favors high-priority information – in this case the high-contrast letters. Similarly, researchers can manipulate recall of neutral items by instructing subjects to specifically remember the item – thereby conferring high priority in processing that information.

Elizabeth Kensinger followed Mather's talk by discussing the possible neural mechanisms that control when we remember an item versus the context. Her team has done a series of experiments that involve placing a negative (e.g. dead cat), neutral (e.g. tumbleweed), or positive (e.g. hot-air balloon) image on a neutral background (open prairie). They wanted to map not only whether people remembered the items or the background but also which brain regions were activated when they first viewed the images, so they put people in MRI scanners while looking at different images for short (5 seconds) time period and then tested their recall.

The researchers found that activity in the amygdala and orbitofrontal cortex corresponded well with good memory for items but not backgrounds, while activity in areas of the brain associated with visual processing and attention led to forgetting the background. Generally, high emotional arousal from either positive or negative stimuli leads to a tradeoff between whether we remember an item or the background. The activity within an emotional memory region of the brain, she stressed, leads to selective memory benefits, not enhancement for all details.

There are some exceptions to this rule, Kensinger said, particularly in high-stress situations. There are also some individual differences in emotional processing of memories. For example, she found that those better at exerting control over their actions are less likely to show tradeoffs based on stimulus – such people can remember neutral backgrounds better but nothing can change the enhancement of memory for high-arousal items.

Rounding out the talks were interesting perspectives from Florin Dolcos, of the University of Illinois at Urbana-Champaign, on how emotional distraction can both impair working memory (e.g. make it harder to talk on a cell phone when a car is crashing nearby) and enhance longer-term memory of the event itself, as well as from Guillen Fernandez of Radboud University Nijmegen on neural processes underlying how we respond to stress. Taken together, the talks provided a robust perspective on the state of understanding how emotions can either enhance or inhibit attention, perception, and memory – as Dolcos said, the “double-edge sword” of emotion and cognition. All the speakers addressed how their work can apply to not only healthy adults but also those with disorders such as post-traumatic stress disorder.
Posted by Cognitive Neuroscience Society at 4:07 PM