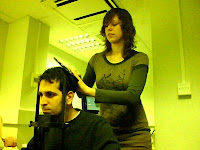 Speaking to a packed Grand Ballroom at the Palmer House Hotel in Chicago this morning, Roi Cohen Kadosh opened the session on non-invasive brain stimulation by explaining that it will not just focus on one single cognitive function but several -- including motor skills, memory, speech, and numerical cognition. And the research spans a range of populations, including young, healthy adults, people with degenerative diseases, and neurological patients.

The research, which Cohen Kadosh has called "futuristic," involves researchers applying weak electrical currents to the head via electrodes for a short period of time, for example 20 minutes. The currents pass through the skull and either excite the neurons or suppress them, with the goal to enhance or alter some cognitive ability. Subjects usually feel only a slight tingling for less than 30 seconds, and the effects can last for up to 12 months.


“Non-invasive brain stimulation can allow painless, inexpensive, and apparently safe method for cognitive improvement with with potential long-term efficacy,” said Cohen Kadosh of the University of Oxford in a statement released today for the CNS 2012 meeting in Chicago. Read the full press release to learn about how this technique is being applied to stroke patients to improve speech therapy, to Alzheimer's and Parkinson's patients to improve memory, and to people with low numerical abilities to improve their math skills.

Posted by Cognitive Neuroscience Society at 8:35 AM