From Flavors to Food Cues: Our Brains on Food 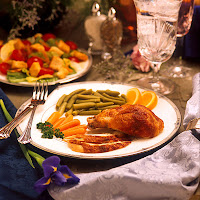 The old saying "The first taste is always with your eyes" is neurologically true, said Kyle Simmons of the Laureate Institute for Brain Research at the CNS 2012 symposium session this morning about our brains on food. The session highlighted a variety of interesting approaches to understanding and responding to the rising trend of obesity.

Whenever we are presented with food or even just the idea of it, our brains automatically start thinking about how it will taste and how eating the item will make us feel, Simmons said. The insular cortex, he reported, is key in this information retrieval. Just going up to the frozen yogurt station and looking at all the options -- the flavors, the bowl size, the toppings -- you will automatically associate the labels with the reward properties of the food.

In this "obesogenic world," how we respond to such food cues, may very well predict our weight, according to Susan Carnell of the New York Obesity Nutrition Center.  Her research has tested responses to both visual and auditory food cues, including looking at brain responses in the fMRI scanner. Some of the results have shown that obese versus lean people have greater activation of brain areas associated with motivation, emotion and decision-making in response to high-calorie versus low-calorie foods. And in those individuals, there is an increased desire to eat.

Dana Small further explored the role of calories in how we learn about flavors. She and colleagues have worked to replicate in humans a study that showed that rats show preference for flavors that they have learned deliver glucose (calories) to them. In her flavor lab at Yale University, they created 5 novel drinks, all different colors, and all non-caloric. In their experiment which involved fMRI scanning and physiological testing, the researchers at some point added maltodextrin to one of the drinks to make it caloric. (They ensured through a series of tests that participants could not tell the caloric from non-caloric).

The results? Healthy people learned to prefer the drink with 112 calories versus the drink with 0 calories. Changes in how they rated the drinks were associated with responses in the insular cortex, which was inversely related to percent body fat. The more obese, the less the response in the insular cortex, which has implications for how increased body weight changes neurological conditions such as interfering with dopamine signaling.

Laura Holsen of Harvard Medical School and Brigham and Women's Hospital rounded out the talks with discussion of eating behavior at the extreme -- from anorexia nervosa to a genetic condition that causes compulsive overeating called Prader-Willi syndrome. She highlighted the different neurological circuitry associated with the spectrum of food intake. You can read more about Holsen's and Simmon's work in a press release issued today.
Posted by Cognitive Neuroscience Society at 3:36 PM